Survey shows more than 50% of people have misconception about hangover

According to statistics from the National Police Agency, Ministry of the Interior, the numbers of drink-driving cases have been on the decrease since 2015. Last year there are 48,054 drink-driving cases—a 10.2% decrease (5,458 cases), compared with 53,512 cases of previous year (2019)*. In order to continue the fight against drink-driving, particularly early-morning drink-driving, the Taiwan Beverage and Alcohol Forum (TBAF) conducted a survey on the perception of hangover. Survey results show that nearly 90% of people know the terminology “hangover”. However, more than 50% of people have a misconception about hangover, including: attributing hangover to individual drinking capacity; hangover can be avoided by taking hangover antidote; people who exercise regularly have a higher alcohol metabolism, etc. To prevent drink-driving and unintentional violation of law, MOTC Minister Lin Chia-lung urges that “if you have consumed alcohol, do not drive, and please give yourself sufficient time to rest and digest the alcohol in your body, so as to avoid drink-driving and endangering others.”

TBAF invited MOTC Minister Lin Chia-lung and famous Youtubers MC Jeng (恩熙俊) and Dr. Beauty (美麗本人) to feature in a promotional film. This anti-drink-driving video targets the youth and emphasizes that: “Drink-driving issue has been one of our core concerns. In recent years we have introduced new measures--such as the 15-hour drink-driving prevention course at one’s own expense, incremental punishment for repeat offenders, alcohol interlock device, etc.—to successfully bring down the numbers of traffic accidents and casualties. However, we should not underestimate the danger of hangover. In particular, with the coming of Lunar New Year holidays and the domestic travel boom, people have a higher chance of taking alcoholic beverages or dishes which contain alcohol. Therefore, we should immediately correct false perceptions and safeguard traffic safety together.” 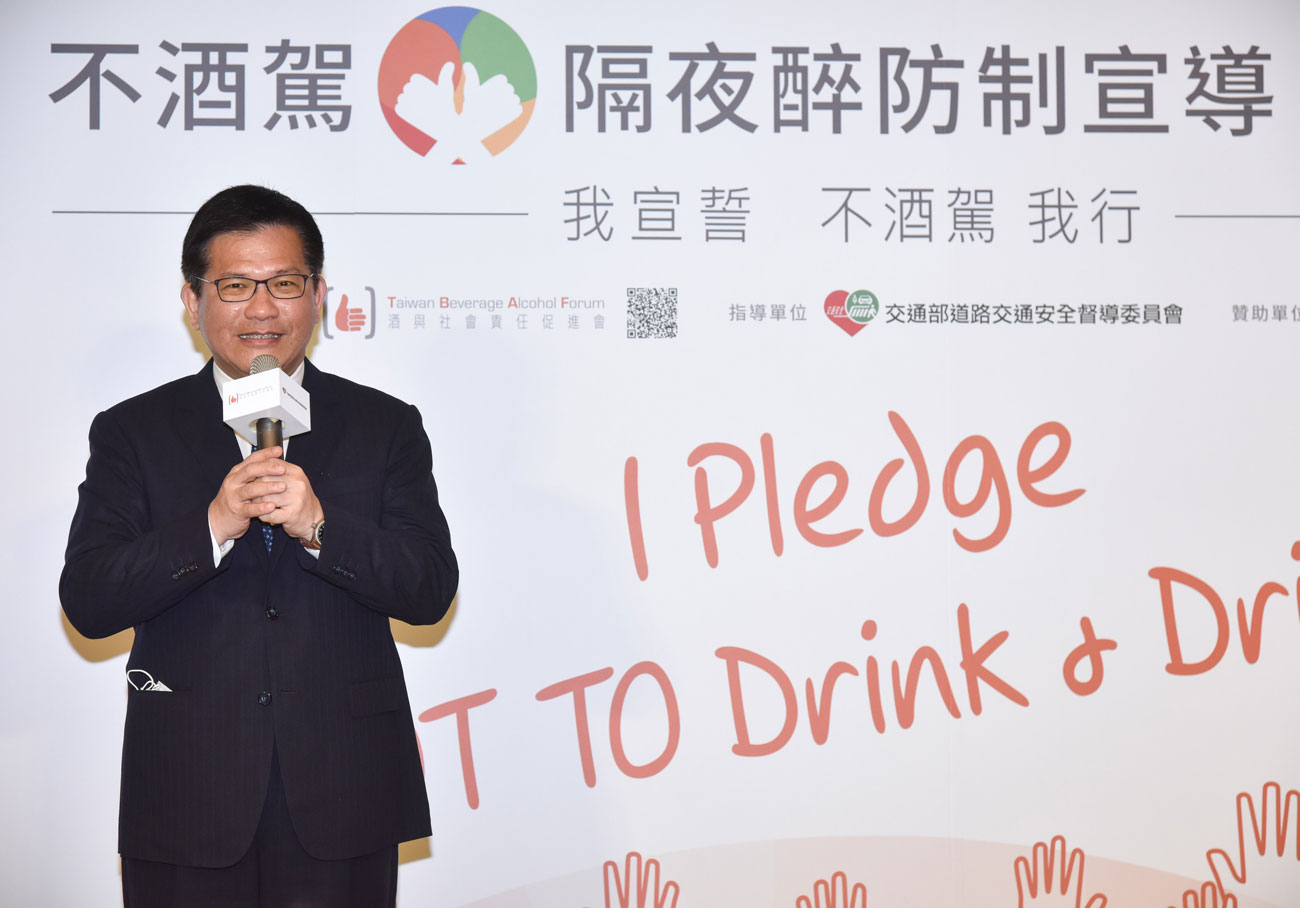 MOTC and TBAF started to campaign and educate the general public on “hangover” since 2019. TBAF has employed various digital and social media for promotion and advocacy work. Surveys have indicated that the people who have heard of “hangover” has increased to 89.5%, while some still have false perceptions. In light of this, TBAF Chairman Dominic Ryan says: “The next focus of our ‘Hangover campaign’ is on correcting false perceptions. We have invited MOTC Minister Lin Chia-lung and Youtubers to feature in our advocacy film, employ the popular medium Podcast, and use languages that would be better-received by the youth to communicate our key messages. Meanwhile, the campaign against drink-driving will continue. TBAF has launched the ‘I Pledge NOT to drink and drive’ campaign in 2017. The original target was to collect 100,000 pledges within 5 years. Last year (2020), with the collaborative efforts of all TBAF members, the numbers of pledges gathered have increased from 110,000 to 160,000. The 50,000 increase is quite significant, considering the absence of actual campaigns due to the pandemic. These amazing results indicate the high support and approval from the general public for our goals. This year, TBAF will continue to echo MOTC’s policy to make ‘I Pledge NOT to drink and drive’ a national campaign.” 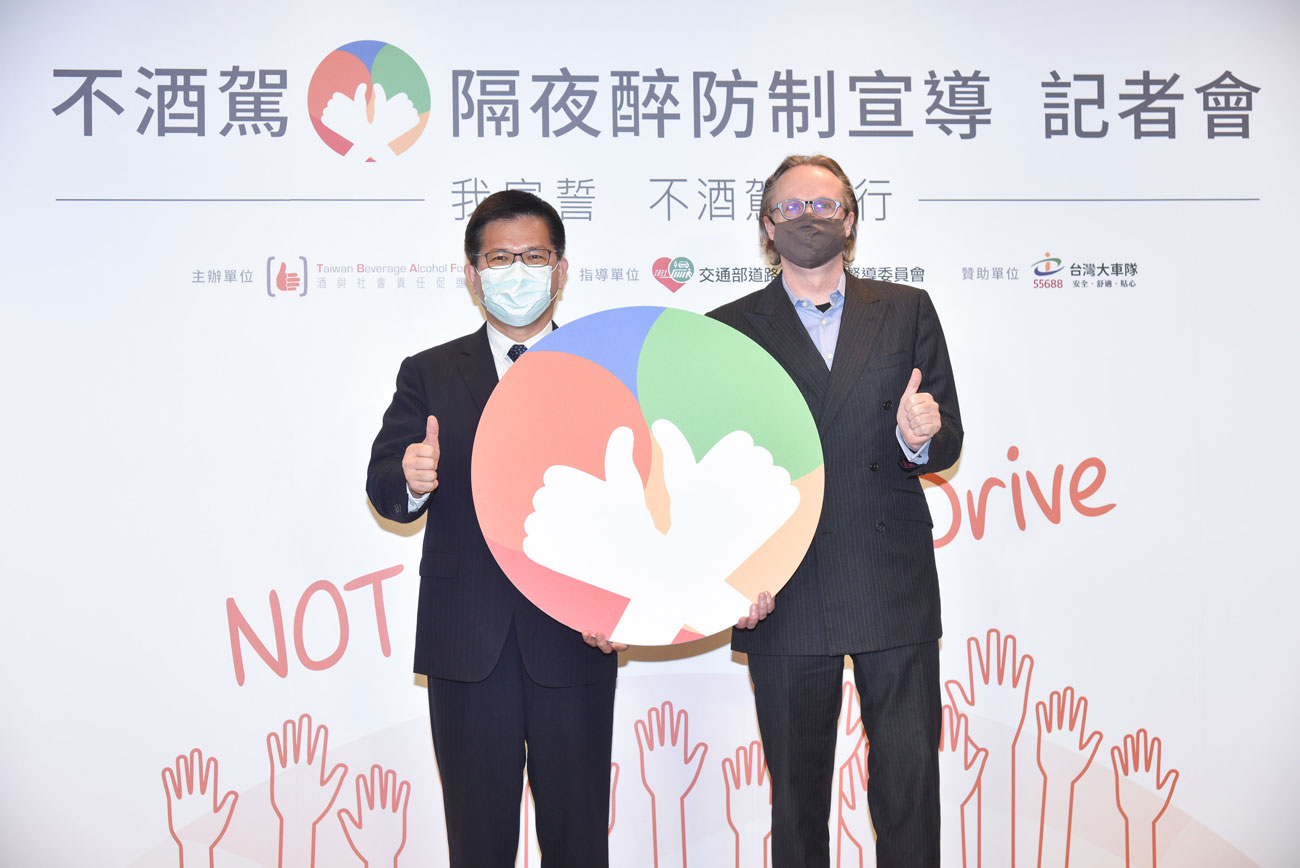 The key challenge for next phase is to address the false perceptions—based on which some people may become high-risk drink-drivers. In light of this, gastroenterologist Dr. Chien Cheng-hung from Chang Gung Hospital in Keelung says: “People often misconstrue that if your face doesn’t turn red or if you don’t get drunk easily, it indicates good alcohol metabolism. Actually, this is not the case. Alcohol metabolism depends on one’s liver functions. Older people or people with liver diseases have poorer alcohol metabolism. Those who exercise regularly may not exhibit symptoms of drunkenness so easily, but it doesn’t mean that they have better/faster alcohol metabolism. Therefore, I would recommend that no matter you show symptoms of drunkenness or not, once you have consumed alcohol, you should avoid driving. It would be a responsible behavior towards yourself and other road users.”